It’s been so long since I wrote. I don’t think it mattered much to people (please tell me I’m wrong) but it has to me. However, I’ve been super busy and tied up in a maze of classes, college and online mock tests. (Basically, gulping down mugs of coffee by the nanosecond). And I’ve been racking my head over what to write. And since the legislative assembly elections are open us, I thought I’d do a feature on it and do a list of all the things we Mumbaikars want from our government commencing this tenure. But I have to warn you, I’m not a religious follower of the political scene, so forgive me for minor slip-ups (and flagrant errors).

1. NO Potholes
My butt and my back request our MLA’s to do something. Staph please, it hurts. Every time I’m sitting in a rickshaw, I feel like I’m in one of those bouncy playhouses and I’m going to fall off, any minute. On a serious note, I think our ‘guv’ needs to allocate funds to the cause. Improving the roads needs to be a secondary concern, if it can’t be made one of the primary ones. 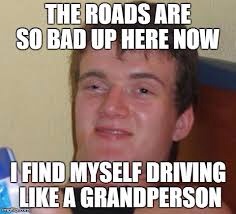 2. NO pessimistic rickshaw drivers
Does this conversation sound familiar?
“Boss — chaloge?”
“Arrogant nay-nod” and drives off like he’s Dhoom’s John Abraham.
They can’t refuse to take us somewhere… they’re not our parents. 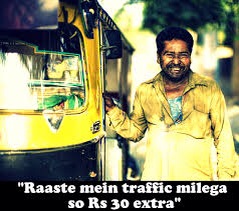 3. NO bribes
This isn’t happening anytime soon, but let’s just throw some light on it. It isn’t the responsibility of just the officials to not accept bribes, we commoners too, need to stop it. The next time you see someone indulging in some “chai-paani”, stop them. It’s as simple. Threaten to click a picture if they ignore. (A picture can do a lot of damage, go ask Jennifer Lawrence)

4. NO Open Garbage
The minute I step out of home I’m treated to ‘fragrances’ I’d rather avoid. It’s unhygienic. Being a metro we’re supposed to give people a whiff of our varied culture, not a whiff of what we had for dinner last night. Stop throwing waste around, and ensure the requisite government officials clean up. (Pun Intended).

5. NO crimes against women
It’s ironic how this is so down on the list when in actuality, I give infinite importance to it. I’ve iterated how I feel about rapists in previous posts, so I’ll keep it short. Ladies, the next time someone even tries to peek into your blouse, scream so loud even crows will fly away in despair. Or just slap him, if it’s a public place.

I was proof reading the article, and it seems like a Fantasy League Version of what’s happening right now. (Tell me you get the reference).

One thought on “Revolution Mumbai”