Now you have to believe me but the last thing I like to do on here, is sing my own praises. After all, I’ve maintained on the blog on the pillar of my self-deprecating humour. But I’d like to share with all of you, my feature in Youth Inc magazine, where I was voted ‘Blogger of the Month’. I’ve recounted how I started to write, and my blog, my inspirations and my love for any one who writes.My premature apologies if that turns to be as boring as I made it out to be.

Here is my complete sit-down with Pearl Mathias of Youth Inc:

Growing up in a household that celebrated individuality and opinion, I was bound to be a strong-minded person with my set of beliefs, ideals. As much as my parents valued silence, they taught me to stand up for the things I consciously believed in. Ever since I can remember, I gravitated towards words. My mother recollects having walked in on me forming letters of the alphabet as a two year old, long before I’d started Montessori. Approximately a decade later, while my friends were challenging each other to PSP trifles, I would be absorbed in a parallel universe, where the Secret Seven brainstormed in the base,met, sipping lemonade. Where Nancy Drew jet setted across Europe solving crimes. Where Birbal earned Akbar’s admiration and the courtiers’ envy.

I’m still the dewy-eyed boy I was back in the day, engulfed with fascination for characters, stories, lives. While I’m enthusiastically pursuing a degree in Chartered Accountancy, I’ve made it a point to keep writing. My current blog, called ‘Akash Kumar’ (A+ for creativity) was launched almost two years ago. Social issues like Feminism, Religious Tolerance, Bullying and Homophobia were my priority. But 2015 was revolutionary for me. Almost like a light-switch, I decided to put myself out there, out of my supposed comfort zone. I ventured into fashion, fiction and challenges. 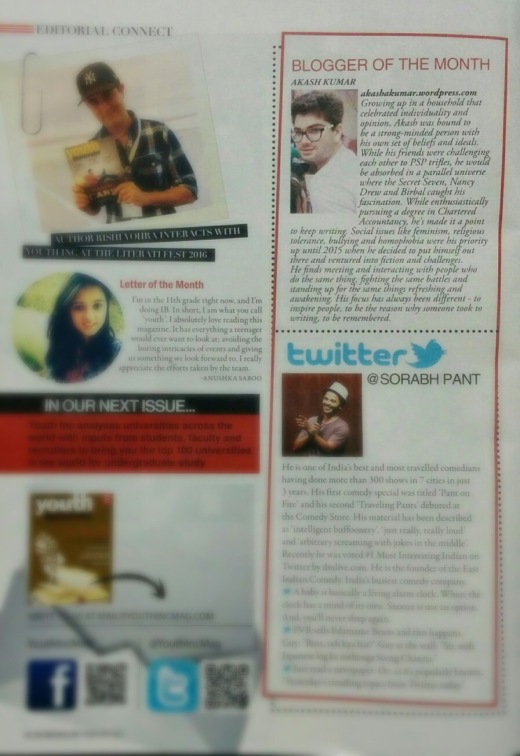 The publishing industry in general, and the Blogging community is an extremely supportive one. I find myself wondering just how many articles I would have managed to put out had it not been for the kind words of so many of my peers. I remember after I wrote two articles in particular, I felt like I wasn’t making much of an impact. That it’d be smart to quit while I’d just begun. You know, no one gets hurt. And I’d abandoned ‘Akash Kumar’. About a month later, I received a message on Facebook, from an acquaintance who I’d met through tuition class. She said to me ‘Your writing is quite fun, why haven’t you updated?‘. It was simple. ‘It’s not getting much traffic, I think I should stop‘. Her response changed my life. ‘You’ve gotta be kidding me. You’re 2 posts old, and you want a fuc*ing Pulitzer. I like your work, and I’m sure people will too. I didn’t take you for such an idiot‘.

Subtlety wasn’t her strong suit. Weeks later, I would write an article titled ‘Horn Ok Please’, which would receive 2000+ views in its first day. The radiance of positivity transmitted has inspired me to connect with people doing the same thing. One of my most memorable professional experiences was the ‘Collaboration Fest’ I conducted all November, where I collaborated with online creators- co-bloggers, YouTubers and poets to curate content.

Writing can be an isolated job, more so blogging. We’re often mistaken for creepy people who don’t go out in the sun, typing away furiously on their computers. We are all of  that, but more. But to meet and interact with people who do the same thing, fight the same battles, stand up for the same things is refreshing and awakening. It encourages me to reach out to my adopted ‘family‘, especially those who’re just starting out and to let them know, not whether they can make it or not, but that there is place for all of us to flourish and success. We don’t have to be at loggerheads.

I can’t force someone to start writing or get them to make a WordPress account. If I could get people to do things that’d be the last thing I would get done. (I would get free food from then, get your head out of the gutter). But I hear so many of my gifted friends talk about the lack of time to start a blog and commit to it. And I don’t really get that, if you’re passionate about something, and have something to share, you need to get off your self-pitying posterior and start doing it. When I started writing about social issues, the blogosphere was redundant. Now you may say it was only two years ago, but that’s a lot of time on the Internet. (No for real, haven’t you heard ‘Internet Years’ is actually a measure of time now). No one was writing about social issues, fashion yes, style yes, movies yes, but social issues and lifestyle was not on the cards.But I kept at it and over time, I’ve had a loyal group of readers, that provide me with feedback that keeps me afloat. As long as you have a voice, you’re going to be heard. Regardless of the genre, if you have a relentless fire burning. At the end of the day, it’s not about how many people comment or the highest number of likes. The target has always been different for me- to inspire people, to be the reason why someone took to writing, to be remembered.

So that was that. If there are any of you that want to start a blog or a YouTube channel or anything creative and are hesitant, please come to me. I shall straighten you up. I hope this serves an inspiration to anyone who needs it. Thank you to all those of you who read my work regularly, and those of you who visit once in a while. While I’m nowhere near where I want to be as a writer, by my own admission, I can sense the evolvement since my first post on here. This might seem quite histrionic and dramatic to you, but my weekly column/article is my getaway and makes me very happy. Thank you for making me a blogger, thank you for helping me be the person I’ve wanted to. Many more to come. I’ll see you next week.

Also, I have some good news. I love having fellow collaborators on the blog. And so it gives me immense pleasure to announce my dear friend Disha Sodha will be hosting a monthly fashion round-up on the blog, come April. I’m super excited. Be good, kids.